Well known Scottish member, Sam Murray, organised a meeting north of the border on Tuesday 27 May 2008 centred around Blair Atholl village and its castle, which is the traditional home of the Earls and Dukes of Atholl.

This beautiful area is known as the gateway to the Cairngorms with plenty of interest in the vicinity including Aberfeldy, Blairgowrie, Killiecrankie and Pitlochry all within striking distance. Members met at the castle, toured the historic building followed by a scenic drive around Loch Tummel. The evening concluded with a dinner at nearby Pitlochry Golf Club. 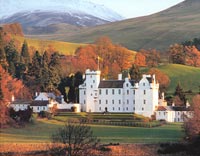 Visit www.blairatholl.org.uk and www.blair-castle.co.uk for more information about the area and the castle