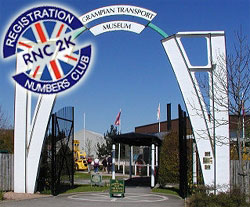 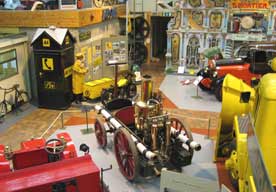 The Grampian Transport Museum was born in the early 1970's when several enthusiasts began to discuss establishing a permanent museum of transport and culminated in 1978 with the formation of the Grampian Transport Museum Association. The museum, which owns various historically important local vehicles, is situated in rural Alford, 25 miles west of Aberdeen and opened in April 1983. An extension was added in 1998 to house the collections care facility, a café and workshop - visit www.gtm.org.uk - for further information.

The RNC Scottish Area Regional Rally was organised by local member Sam Murray (SAM 323 & SAM 343) in support of UNICEF, the United Nations Children's Fund. It was held in conjunction with the Aberdeen MG Owners and North East Scotland TVR club's event. Set in this beautiful part of the Scottish highlands the rally attracted over 35 entries with visitors travelling from places as far away as Surrey, Hertfordshire, Yorkshire, Wales, West Midlands and Lancashire and, of course, from Scotland ... in fact a total of 4,625 miles was travelled by participants attending this regional rally.

The Lady Provost of the City of Aberdeen , Helen Reynolds, toured the rally field with the organisers during the day arriving in her official car bearing the unusual registration RG 0. This plate dates back to Local Taxation Office days when eight zero plates were specially created for Mayoral cars. As well as Aberdeen (RG 0) they include Glasgow (G 0), Renfrewshire now Eastwood (HS 0), City of London (LM 0), Edinburgh (S 0), Midlothian (SY 0), Lanarkshire now Glasgow (V 0) and Greenock (VS 0).

Over £175.00 was raised which has been donated to UNICEF ... thank you to everyone who entered and joined in the spirit of the day despite the rather inclement weather.